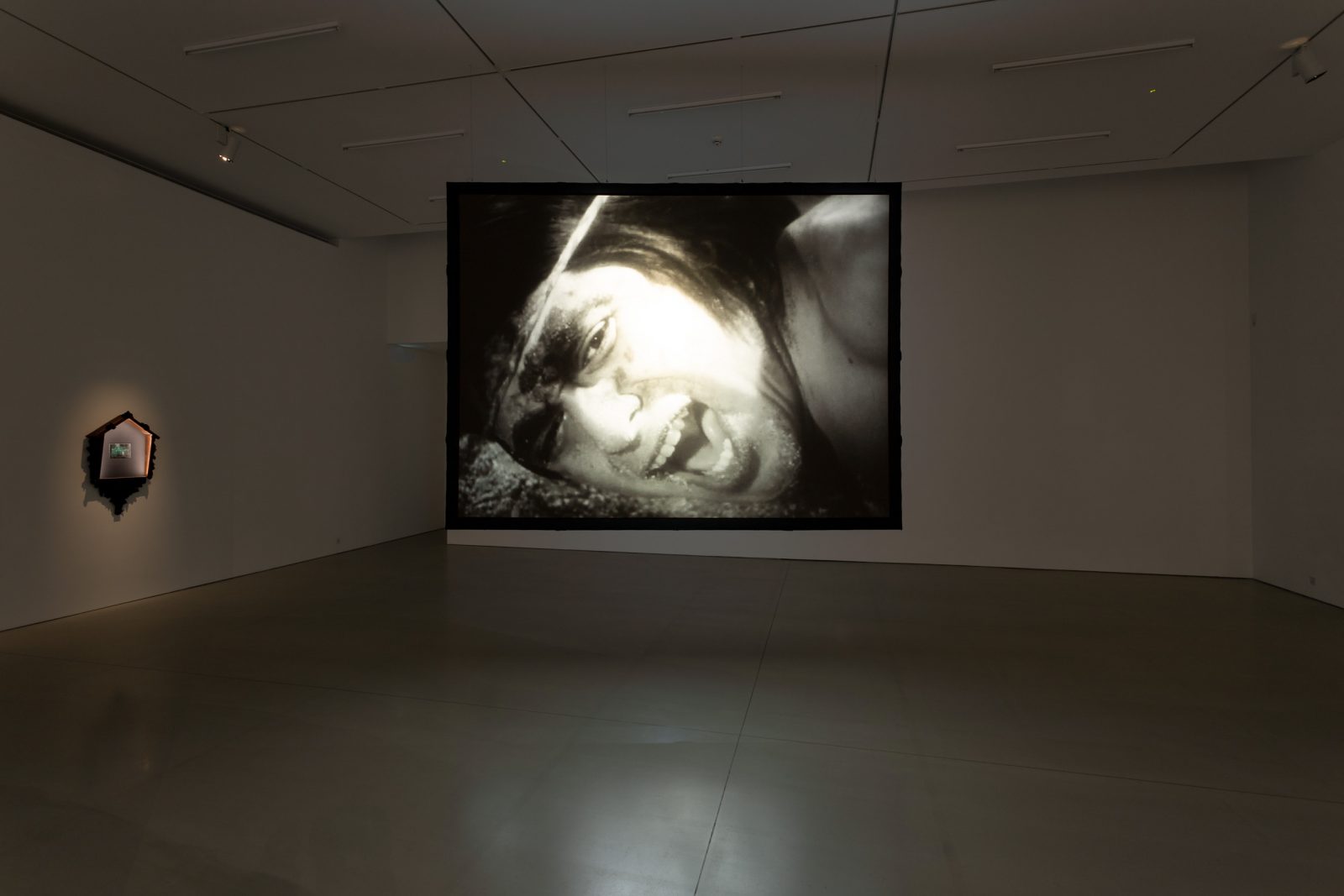 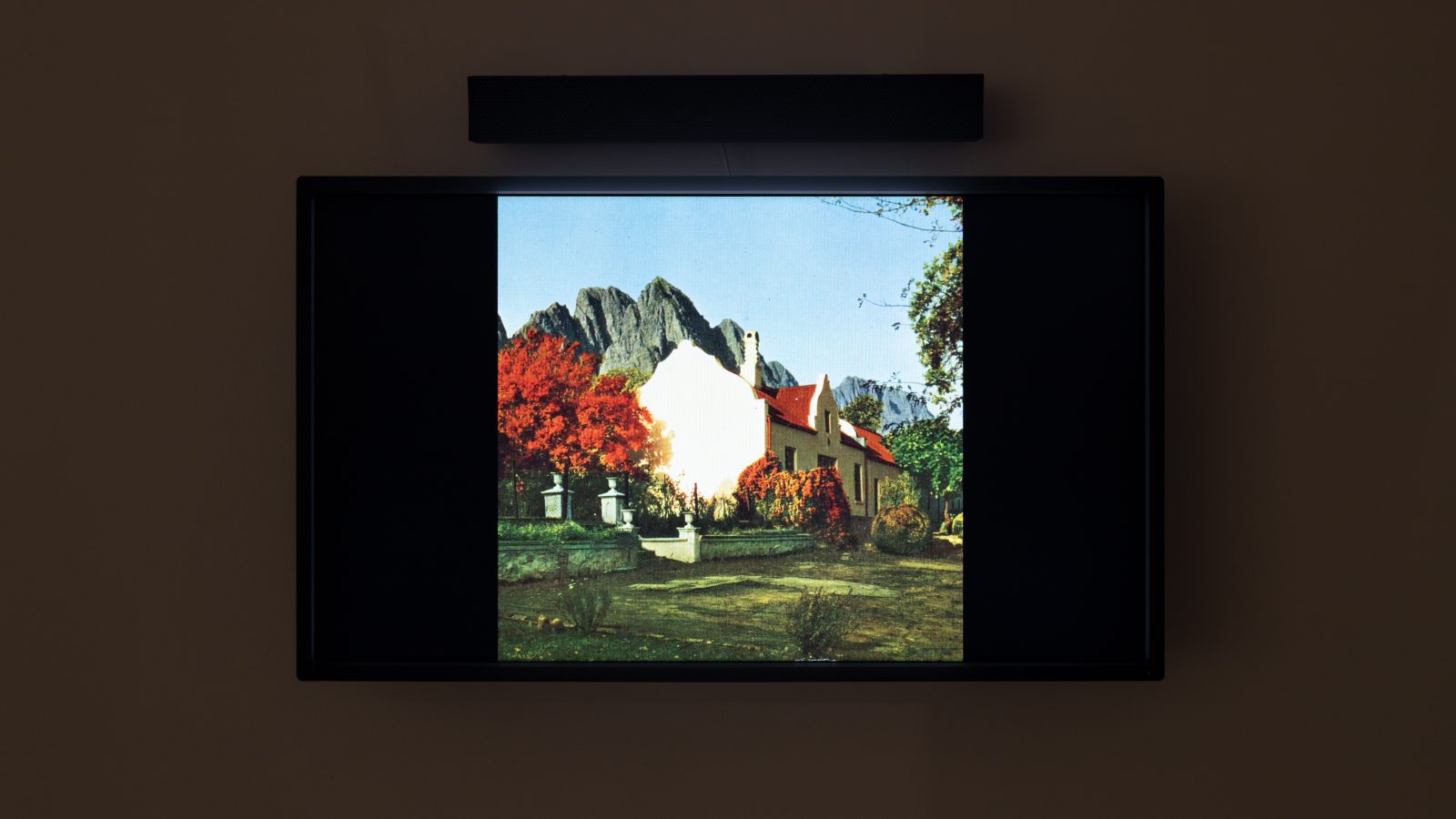 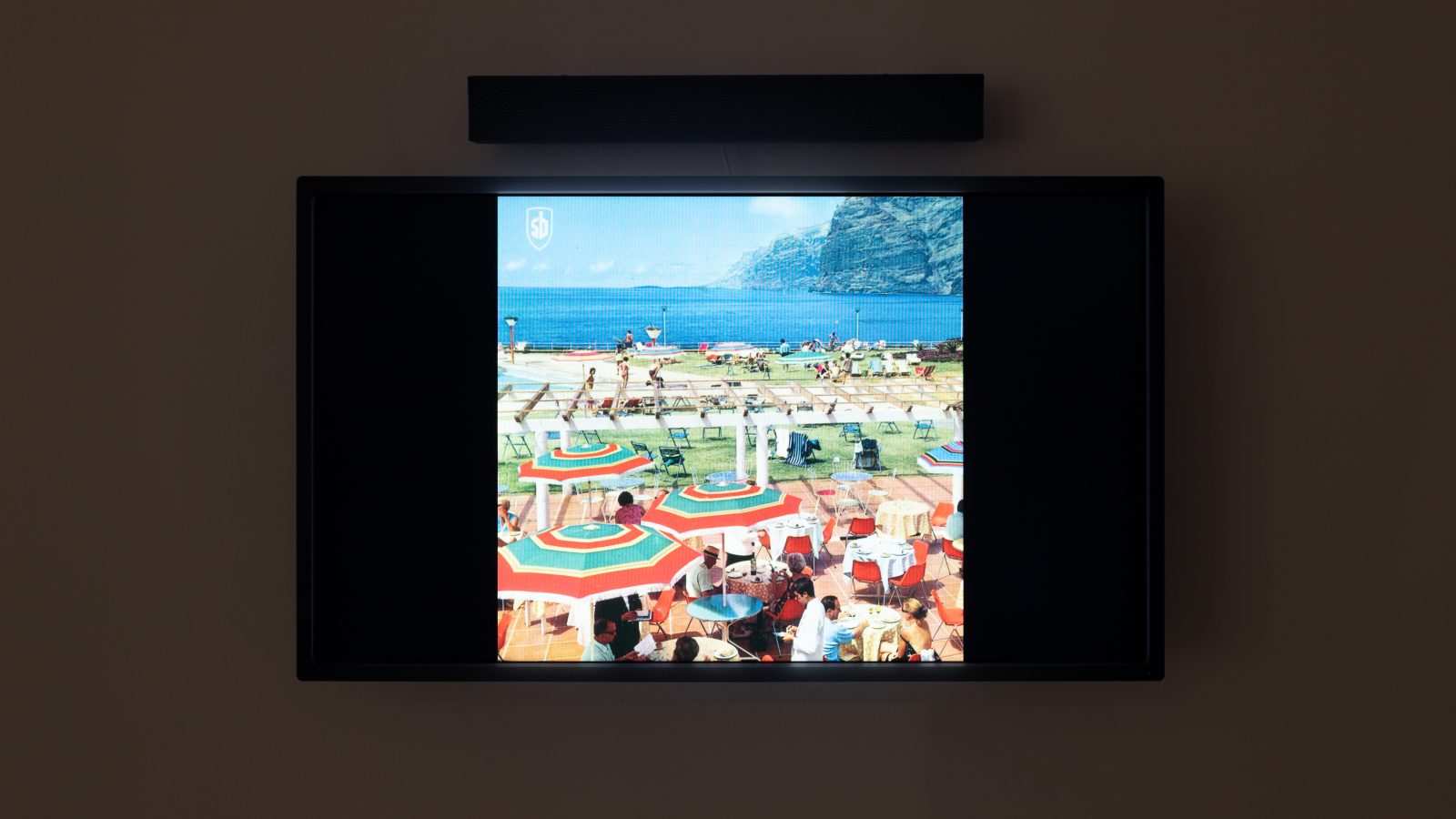 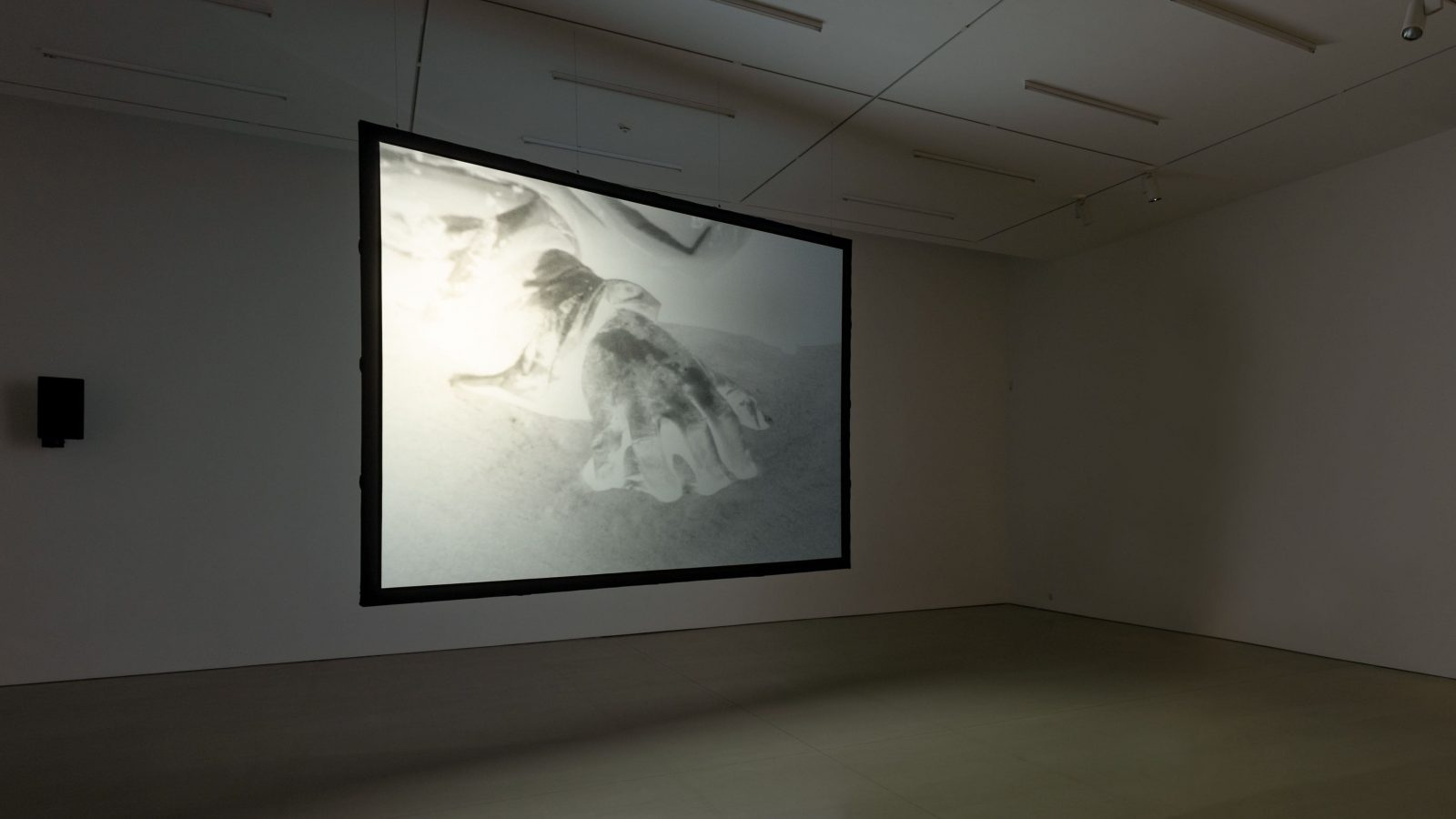 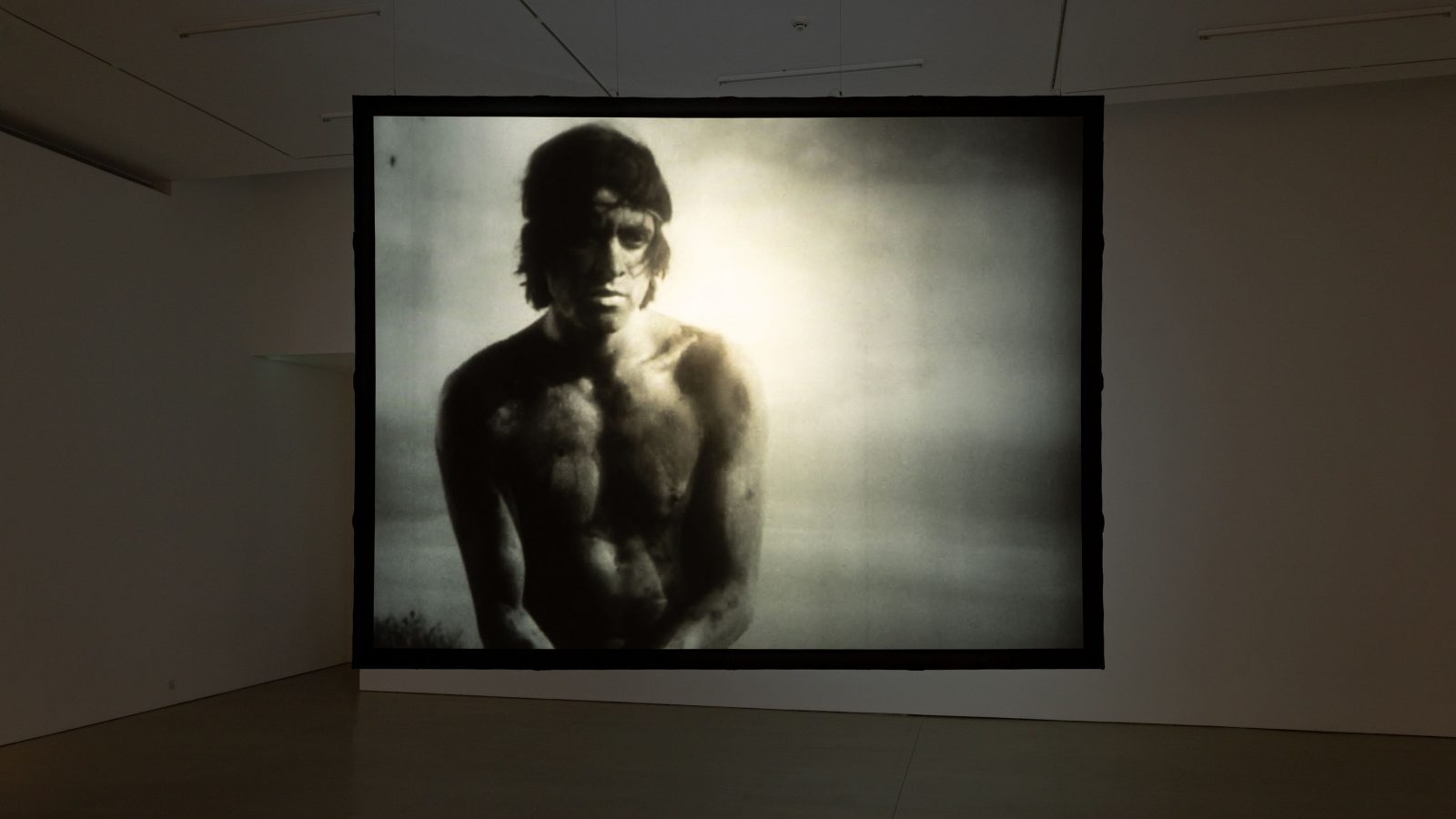 Recently Maud Haya-Baviera has been interested in tourism; the promotional images that it generates, how it exemplifies contemporary consumerist desire, and this activity’s place within histories of exploration, exploitation and leisure industries. In the artist’s recent work one can trace the development of this preoccupation, from an initial break with the past and necessary reassessment of a culturally foundational text in Things Fall Apart, through to a narrated slideshow of oversaturated postcard imagery. Seemingly typical, or innocent, snippets of holiday correspondence reveal troubling attitudes in Wish You Were Here, and finally No Longer at Ease, a new work which has not yet been shown publicly is titled as though a self fulfilling prophecy. With Things Fall Apart, shown at Site Gallery as part of the exhibition Heavy Water, an initial plan to engage with themes of self-sufficiency and the diaristic form through Robinson Crusoe swiftly became untenable on rereading, leading to a parallel engagement with Chinua Achebe’s Things Fall Apart, from which the work takes its name.

Haya-Baviera’s original idea had been influenced by the isolation and repetition of living under pandemic lockdown restrictions, and the way that this intuitive response evolved through a critical reassessment of the source material is indicative of the artist’s approach in general, whereby once a realisation takes place it must be addressed. A markedly political and socially engaged turn has taken place in Haya-Baviera’s work during the past few years, beginning loosely with The Waves (2019) and Kinder (2019), however it is important to foreground aesthetic experience even in these works that refer explicitly to contemporary phenomena and prominent political issues. The look, sound and feel of each work is dictated by the starting point and subject matter, meaning that style and visual language can differ greatly between works. This is indicative of Haya-Baviera’s method of taking the viewer on a narrative journey through her recent thoughts and realisations, without being particularly didactic about it; speaking from a position of discovery rather than authority.

For example, within Things Fall Apart a painterly vision of watery disaster is soundtracked by a highly edited collage of Maria Callas singing in Bellini’s Norma, evoking associations of drama and tragedy from the Western cultural cannon; J.W.M Turner’s The Slave Ship also comes to mind. But, the footage used by Haya-Baviera is solarised into shades of cyanotype blue and bleached white, precluding a straightforward reading and contrasting unnervingly with the saturated palette of holiday advertisements that follow. Clipped footage from Robinson Crusoe adaptations and decades-old representations of indigenous cultural practices creates a stew of imagery that nonetheless draws a clear line between racist colonial narratives, anthropological practices and the tourism industry.

With its associations of bright sunlight and hazy memory, the visual aesthetic of tourism is also present in Wish You Were Here, presented on a much smaller screen to the side of Things Fall Apart in Heavy Water, appearing like an offshoot of thought that does indeed continue and evolve further in the artist’s most recent work, and her still developing ideas. For Haya-Baviera it was also important for these works, developed during Platform 20, to function in conjunction with the work of Victoria Lucas and Joanna Whittle at Site Gallery. While each artist had been working individually, there are points of convergence and comparison that seem inevitable in their poignancy, with an exploration of alienation and a striving for the sacred in unlikely places uniting the cohort.

In this sense, the adaptability and openness of Haya-Baviera’s practice creates the space to harmonize aesthetically while traversing the artist’s specific interests. For example, alongside this ongoing consideration of tourism, travel and consumerism, there is the performance and artifice inherent in hosting tourists, which is something that Haya-Baviera has played with in Choose Your Own Adventure in Whitley Bay, a public digital artwork commissioned by ArtHouses and accessed via Wifi hotspot. From a reassessment and critique of the desire for ‘self-sufficiency’ in ‘paradise’, picking apart these concepts through re-presentation and juxtaposition, Haya-Baviera is currently interested in desire itself, and in particular the tension between a necessity for ethical critique and the inherent danger of policing desire. Holiday advertisements and tourism in general continue to provide rich ground for this exploration whereby availability, sexual or otherwise, is yoked to consumer happiness.