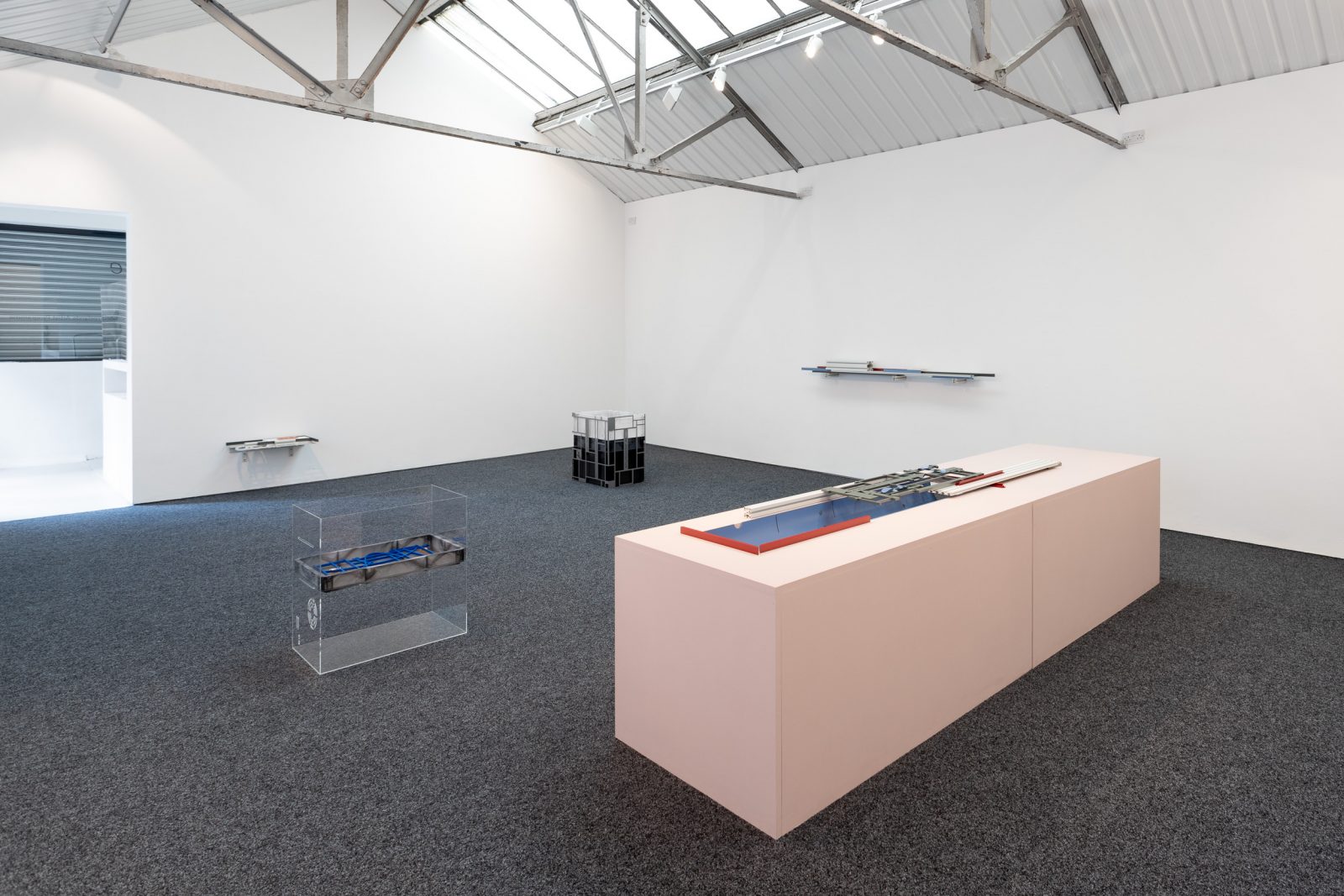 Sometimes art can function as escapism; a way to soothe away the daily frustrations and humiliations that characterise working life, or simply a distraction from overwhelming worries. James Clarkson’s new work that was shown at Bloc Projects in the solo exhibition K-House certainly has a soothing quality. Perhaps better described as numbing or anesthetizing, here the effect is administered knowingly. This is not to say that the work isn’t fascinating in it’s material intricacy, or that new knowledge and understanding can’t be generated and inspired here, but rather to emphasise that this is achieved by turning an intense aesthetic and philosophical focus on things that are designed to be ignored, even while they are made use of. Here you won’t find exotic or alien imagery and otherworldly facades, but in works like ‘Stack (Restrict)’ (2021) the colours, surfaces and shapes will seem oddly familiar without being pinned to any one place, person or activity, tapping into the aesthetic uncanniness of liminality. This is because Clarkson has purposefully constrained his palette to that of ‘the office’, and specifically the parts of these working environments that are near-enough universal. Indeed, here the very modularity and interchangeability of the spaces and platforms – whether real or virtual –  that many of us spend the vast majority of our time occupying is the object of scrutiny.

Through this collection of desk-like, shelf-like and excel workbook-like objects Clarkson invites us to pay attention to how they make us feel, and how they affect our thinking in ways that generally can’t be indulged between 9 and 5, or whatever the shift pattern may be.  Clarkson describes the genesis of this current research as arriving during a period of reading contemporary scholarship on the information age; global computation, flows of information, money and things, along with what this means for the individual disempowered worker. At this time the artist was also working in a day job consisting of data management, or to put it another way, translating the official signifiers for various real-world objects into other signifiers in order to smooth their way through the aforementioned flows. There are specific references to this role and Clarkson’s experiences here, such as the title of exhibition which takes its name from a building on the business park where the artist is employed, but part of the point is that even such references derived directly from lived experience will be repeated across numberless roles throughout global supply chains, and as such are likely to be ambiently familiar to many.

This tension between personal specificity and it’s apparent meaninglesness within the ‘The Stack’, to use Benjamin Bratton’s terminology, is exemplary of how this exhibition functions. Each individual work of Clarkson’s asks us to consider the soft human body and the pliable human mind in conjunction with impossibly fast flows of information and sharp edges that may not be designed to wound, but certainly aren’t for comfort. For example, with ‘K-House (Data Transfer Map)’, the first produced within this current creative interval, the basic structure of a desk is intermingled with reproductions of and allusions to the the human body overlaid with the grid of excel and the codes or nomenclature that makes it – and you – useful. Arrows are straightforwardly symbolic of forward motion but also hold unstable and perhaps volatile meanings, as a ubiquitous and easily understood symbol that can be flipped to point in the opposite direction. Another seemingly straightforward signifier, the arabic numeral, is disrupted by Clarkson through material reproduction and manipulation. Laser cut from steel, powder coated and then curved around a standard aerosol can, a ‘5’ appears as something abandoned, that has curled up at the corners like an old post-it note.

Elsewhere motifs such as the dotted line, symbolising temporariness, are deployed in scenarios that are incongruous with their use, and with many of the works on show in K-House their bodily dimensions, honed down to the epitome of usefulness, invite and repel touch in equal measure. Clarkson described the gallery at Bloc Projects, carpeted with springy grey tiles that dull sound and warm the space, as an ‘office plinth’ with which his assembled sculptures are contextualised. This feels apt when in the space of the exhibition, surrounded by materials, shapes and connecting-parts that have been situated critically in their recapitulation of the ‘office experience’. This can be observed both in the overall feel of the work, and through specific details. There is the way in which components are layered so that they overlap with each other, concealing but also creating an interface between different materials and symbols, in turn producing the familiar anxiety of having too many tabs open on a computer screen. Then, some of the items on display are found and some are made, but it’s difficult to tell which is which, and seen from behind the scenes of mass consumerism, it’s unclear whether the distinction makes sense or even matters.

Images: Documentation images of K-House. Courtesy of the artist.