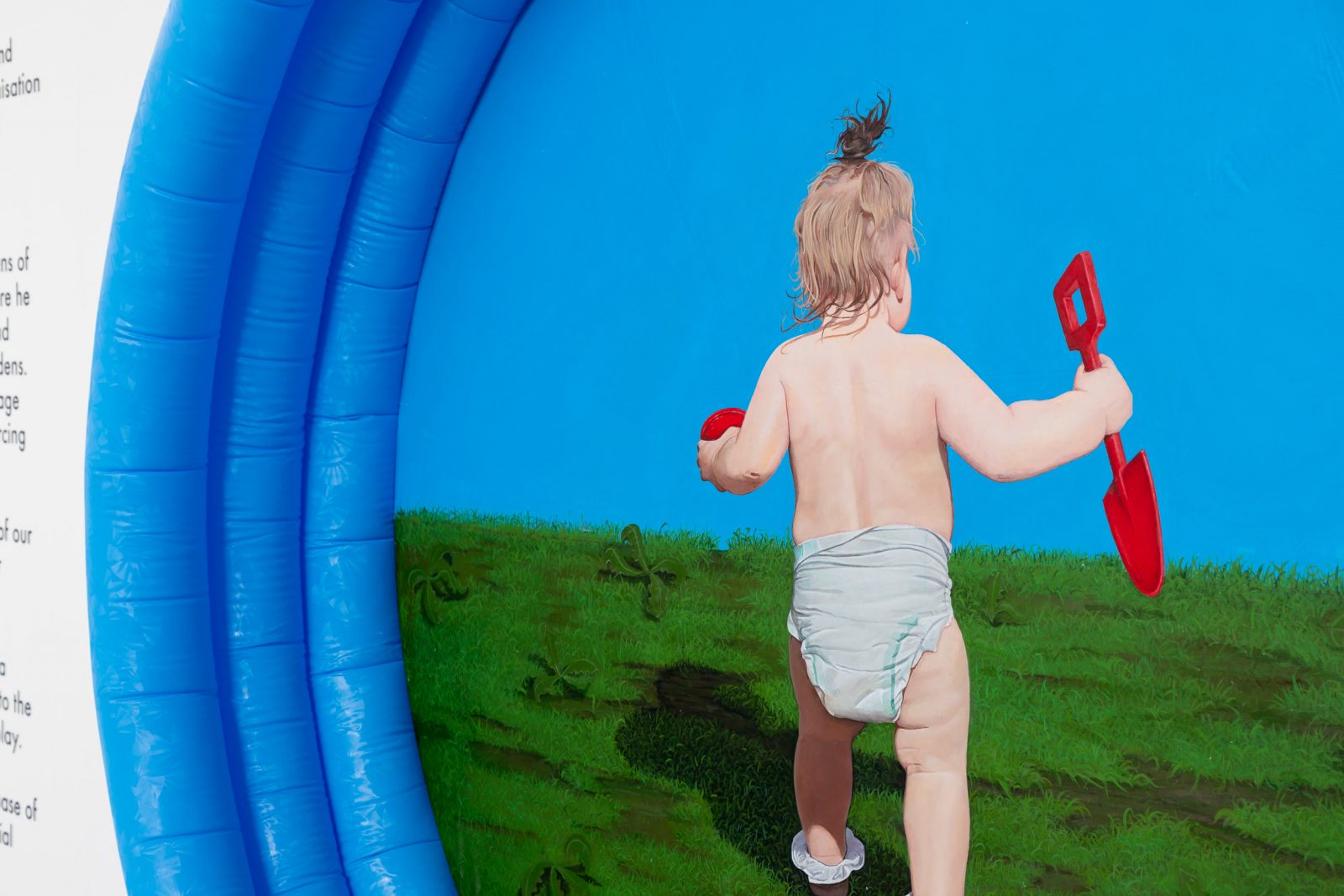 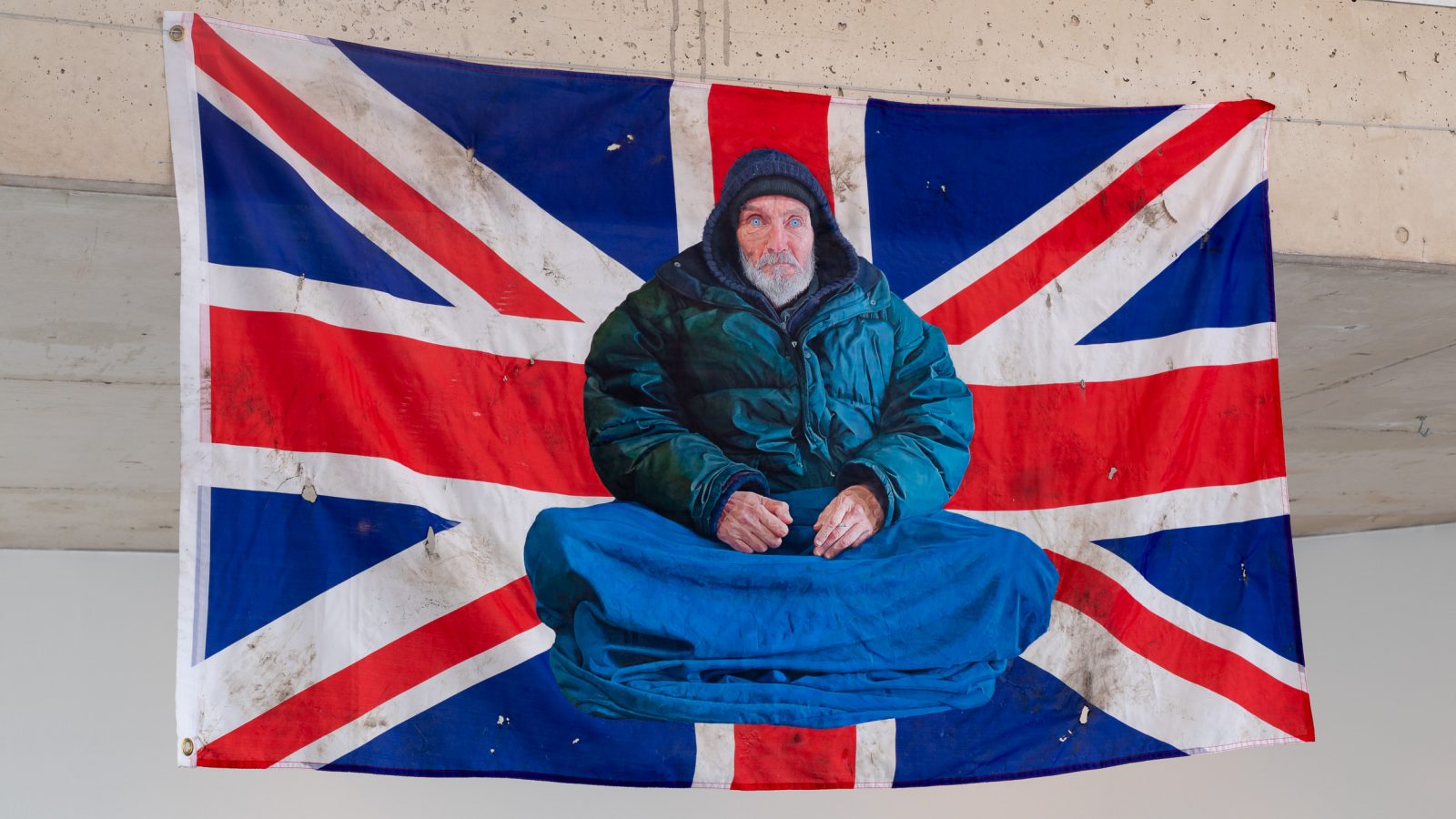 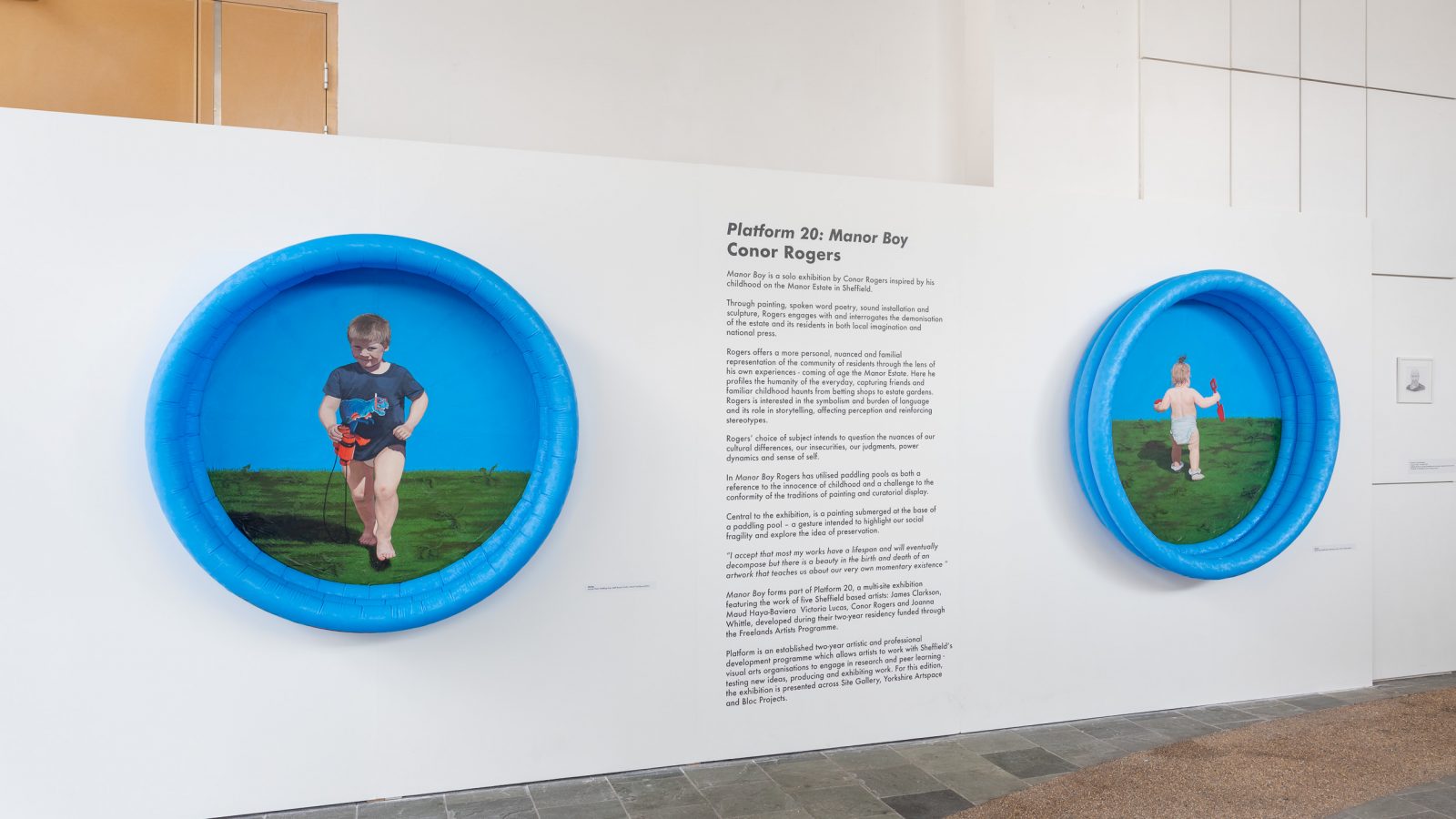 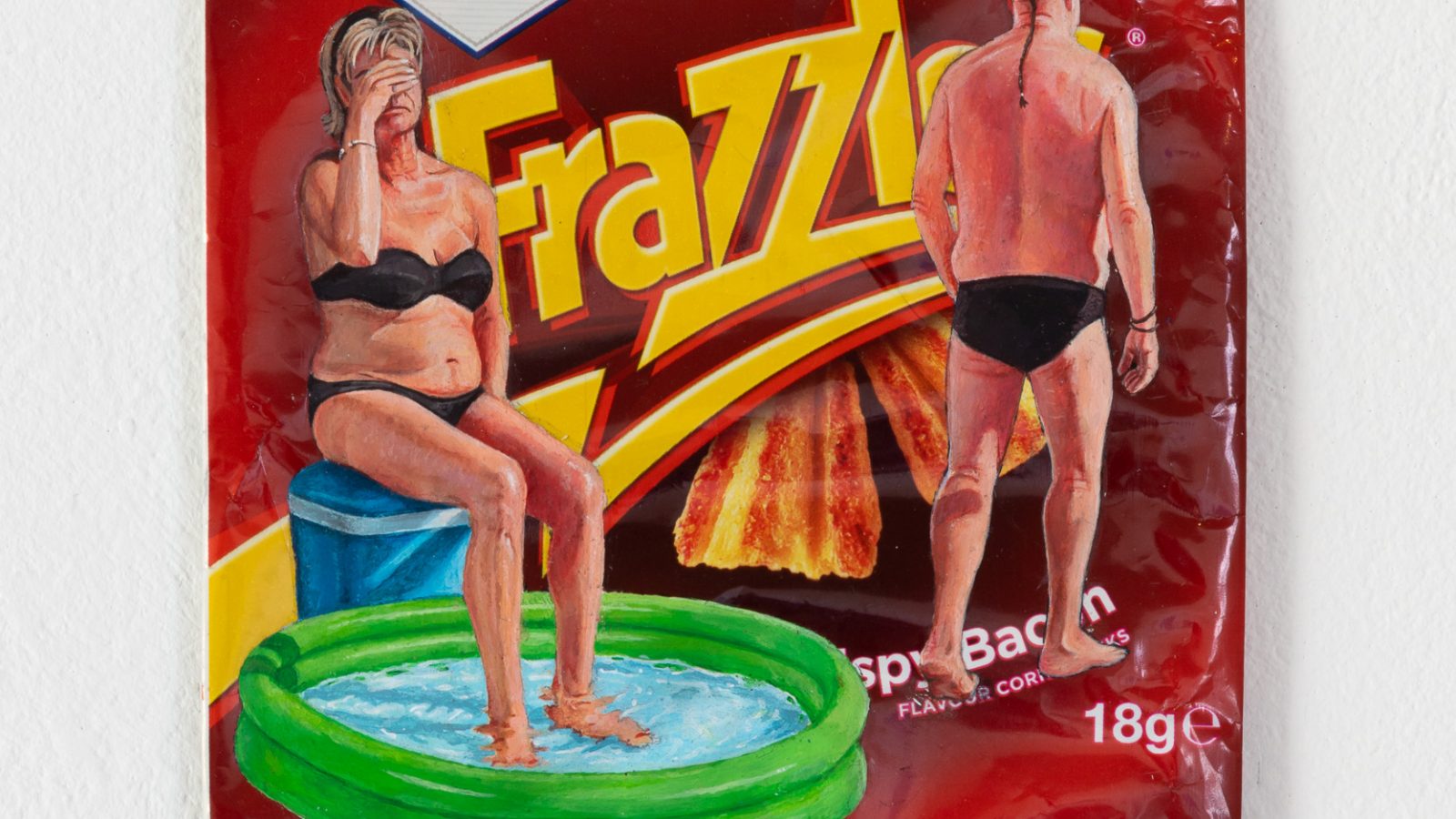 Conor Rogers often refers to the substrates of his work; the grounds upon which his ideas grow and feed. An important part, although not the only part, of the artist’s creative project is to explore and represent his own background. Note, however, that Rogers refers to substratum in the plural, signalling an interest in how different spheres of influence intersect and impact each other. An expanded, Modernist conception of painting, is played out in the artist’s recent solo exhibition through specific material references to the Manor housing estate in Sheffield, where Rogers grew up and from which the exhibition took its name. As such, incursions of the everyday into the revered interior of the gallery are conceptually purposeful beyond their biographical aspects. Rogers describes how the idea of painting on canvas had never appealed to him, and he has been painting on other materials since he was studying art at Sheffield Hallam, identifying this as the reawakening of a childhood habit. While being looked after by his Grandfather, Rogers would draw on abandoned betting slips, using this debris as a canvas and the local pub as a studio. Rather than simply accepting this as an inherent and self-evident part of his practice, the artist has undertaken a systematic process of questioning to reach a new understanding of both his own instinctual creative acts and how this might act upon the viewer when displayed. Often depicting aspects of contemporary British life that are customarily dismissed, or made an example of, Rogers conscientiously considers the inner lives and motivations of the people he portrays, and the spiritual importance of the territories they are situated within.

The artist refers to this as honouring his subjects, as well as his own personal history, but these works are more than simple commemoration. Symbolism is important for Rogers, and he describes how in selecting the objects that will be used as grounds for painting, the objects and materials are honoured too. Many of Rogers’ works seem to ask; what happens if we approach this material, this object, and what has been depicted here with care and reverence? What new ideas and understandings can be generated? This is achieved in part through the assurance with which he communicates, meaning that as viewers we are compelled to acknowledge our own underlying attitudes and proximity. In the most recent body of work on display as part of Manor Boy, a sense of innocence and playfulness in dream-like spaces dotted with the frilly yellow heads of dandelions, is punctuated with references to abandonment and loss. An exploration of the dichotomy between hope and despair is a longstanding part of Rogers’s practice, and neatly brings us back to his earlier series of miniatures on betting slips. Often characterised as an indication of high-street decline, the artist offers an understanding of how these spaces function emotionally for the people that use them, and expresses empathy for the impulse to escape one’s current circumstances. As Rogers would have it, they are spaces of dreaming and possibility as well as whatever else they might be in a wider societal context.

Having found a level of success in terms of competitions and sales after graduation, Rogers had struggled to carve out the space needed to push his work in new and unexpected directions. With Manor Boy at Yorkshire Artspace, the artist has for the first time included writing and spoken word interventions. Describing his role as that of storyteller, the way in which Rogers speaks about his practice belies a desire to keep avenues of enquiry open, and therefore active and effective. This can be difficult to achieve in an artworld that rushes to tokenise and commodify, but here Rogers has been able to extend in multiple different directions at once. In this exhibition there is experimentation towards collective experience and intimacy with the viewer, with Rogers having previously often worked in miniature, but here also displaying a triptych of relatively large-scale new paintings that take typical children’s paddling pools as their canvas, creating a circular ground and inflatable frame. This conceit could have resulted in something twee and unserious but the gravitas with which Rogers treats his subjects precludes such ironic detachment. The moments that Rogers depicts here are of action and awareness; as viewers the subjects retreat from us or meet our eyes, but the spectre of dereliction always hovers nearby, puncturing but never fully collapsing the hopes and dreams, the futurity, of the people who inhabit these spaces.