‘What Does Art Do’ in South Korea? 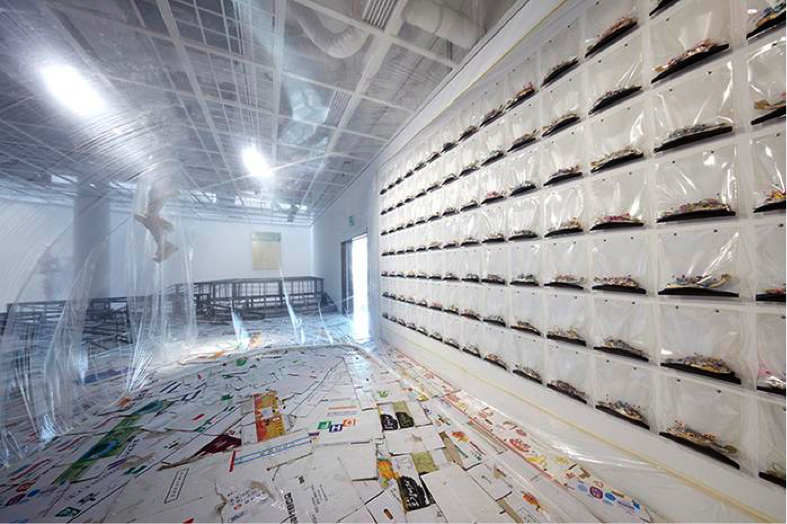 Site Gallery Artistic Director, Laura Sillars writes about a recent British Council research trip to South Korea. The trip took her to Seoul and its MediaCity Seoul Festival, Busan and its Biennial: ‘Hybridizing Earth: Discussing Multitude’ and 11th Gwanju entitled ‘The Eighth Climate: What Does Art Do?’

Visiting three Biennials, three cities (one of which is a mega-city), speed-date-style meeting over 50 professionals, visiting 20 institutions and travelling by plane, bullet train, boat and bus in a one week period is not for the faint hearted!

What can you really learn in seven days? I have been left with three resounding senses:
1. The South Korean art scene has some amazing women at the helm (working as directors, artists and activists).
2. The scene has already experienced rapid expansion and it still seems to be accelerating through government investment and corporate sponsorship.
3. South Korea has a unique approach to public art – possibly coming from its Buddhist traditions – which includes the creation of stunning, singular outdoor structures.

Some South Korean Artists to know about:
From twentieth century media art pioneer Nam June Paik to Do-Ho-Suh, Young-Hae Chang Heavy Industries, Nikki S. Lee and Haegue Yang, there are plenty of South Korean artists operating in the mainstream international art circuit. On arriving in Seoul, Pat, who runs the ONE AND J. Gallery sent me a list of 50 gallery recommendations. This list was both amazing and overwhelming.

While battling with jetlag, I soaked in hundreds of artworks – there are so many artists, ideas and approaches to highlight. Here I want to focus on five fantastic artists, who happen to be women, presenting work in Seoul while we were there: Cheong Seoyoung, Lee Bul, Sora Kim, Kim Sooja and Kim Seo-Kyung.

All of these artists are well known, with international track records. Seen together, something of an aesthetic continuum emerges. A quality of seriousness and lightness, a sculptural approach to space with a close affinity to minimalist making traditions – not simply of the Modernist western tradition – that connects to the complex craft traditions of the region.

Lee Bul manages to bring together entirely disparate objects (including rotting fish in plastic bags) into a visual unity. Set in a context of a country that has achieved democratic independence within living memory, Chung Seoyoung’s lookout towers in light wood, presented almost as a traditional form of architecture become moving testimonies. And, as anyone who knows the Site Gallery programme will know, I love artists’ books and book projects. The democratic force of the paperback, its ease of distribution and simplicity in sharing ideas, despite technological advancement, still holds power. Gathering 96 books from friends, Kim has developed a set of performances Liquid Pages using the books as a source and score.

These works were presented at the Art Sonje Centre and it’s appropriate to highlight this fantastic centre and its work supporting artistic development, giving artists space and time. Each occupying a floor of the gallery, these artists developed quiet, reflective, singular works.

What we couldn’t see though was that Art Sonje runs a residency programme in the DMZ (demilitarised zone) along the border and between North and South Korea. Right now they are hosting an international conference about borders, conflict and social change. This is a seriously inspirational, privately run museum aiming to make change in the world.

So what does art do here? It provides space to think. Find out more here.

Down the street is the MMCA – an enormous re-configured Japanese secret service bunker of a building converted (as part of an art for national healing programme?) into an utterly enormous art museum with eye-watering budgets. Kim Sooja has to be one of the most well known of Korea’s daughters and my experience of her work is mixed. Here though, MMCA had commissioned a stunning piece situated in a courtyard in the centre of their labyrinthine space.

Mixing the traditional methods of fabric weaving that she is so known for, with a light-refracting screen, the new work created an eerie disjuncture between ways of seeing. A sort of nostalgia seen through the lens of a digital seeming analogue screen – I love it!

Maria Lind’s Gwanju Biennale asked ‘What Does Art Do?’ and pages could be written on some of the propositions her project posits, as well as all of the other places, exhibitions and people that we met. For me though, a protest in Seoul answered Maria’s question quite eloquently.
As we arrived in Seoul, the streets were lined with armed police and people were taking to the streets in opposition to a perceived corrupt president.

Around the corner from our hotel was a small, traditional figurative sculpture by Kim Seo-Kyung and Kim Eun-sung of a South Korean woman sitting quietly facing the Japanese Embassy. Under threat of removal, it was surrounded by placards, a tent and a quiet guard of activists.

During the Japanese occupation, teenage girls as young as 13 were imprisoned and designated ‘comfort women’. Many committed suicide and we can only imagine the quality of their lives. A recent financial settlement has been reached with Japan to compensate the remaining 44 women who still live on. Women’s rights are a live issue now in South Korea, we witnessed protests around abortion rights and current challenges to patriarchal structures.

So, what does art do here? In amongst so much corporate and politically endorsed art, grandiose institutions, vast city-wide biennial projects, intriguing public sculpture parks and visual noise driven by a plethora of motivations, this little sculpture shows that art can mean something.

It can serve as a historic tribute and activist symbolic tool. And, the international jamboree is not always the most salient – the local has resonance too. Art can ask society to remember the past as it transforms the present.

In all of the festivals we saw, I found artwork that inspired, intrigued, confused and perplexed me. When you’re travelling you gain a whole new backdrop to your thinking. Here, kimchi and raw fish, Buddhist Sculptures, temples and flower arrangements, huge container docks, dizzying bridges over spaghetti road systems, confusing metro systems and train stations (in which we found more art!), bakeries and the odd bar (Fuzzy Naval in Busan a particular highlight) will frame my memories.

The fragment of paper from the Bernd Kraus newly commissioned installation in the Gwanju Biennial sort of sums up what I thought about on this trip: having a life is a political act. Bringing art from Korea to the UK and vice-versa needs to be relevant to the microcosms it connects with as well as having a place in the no-mans-land of the international world of art.