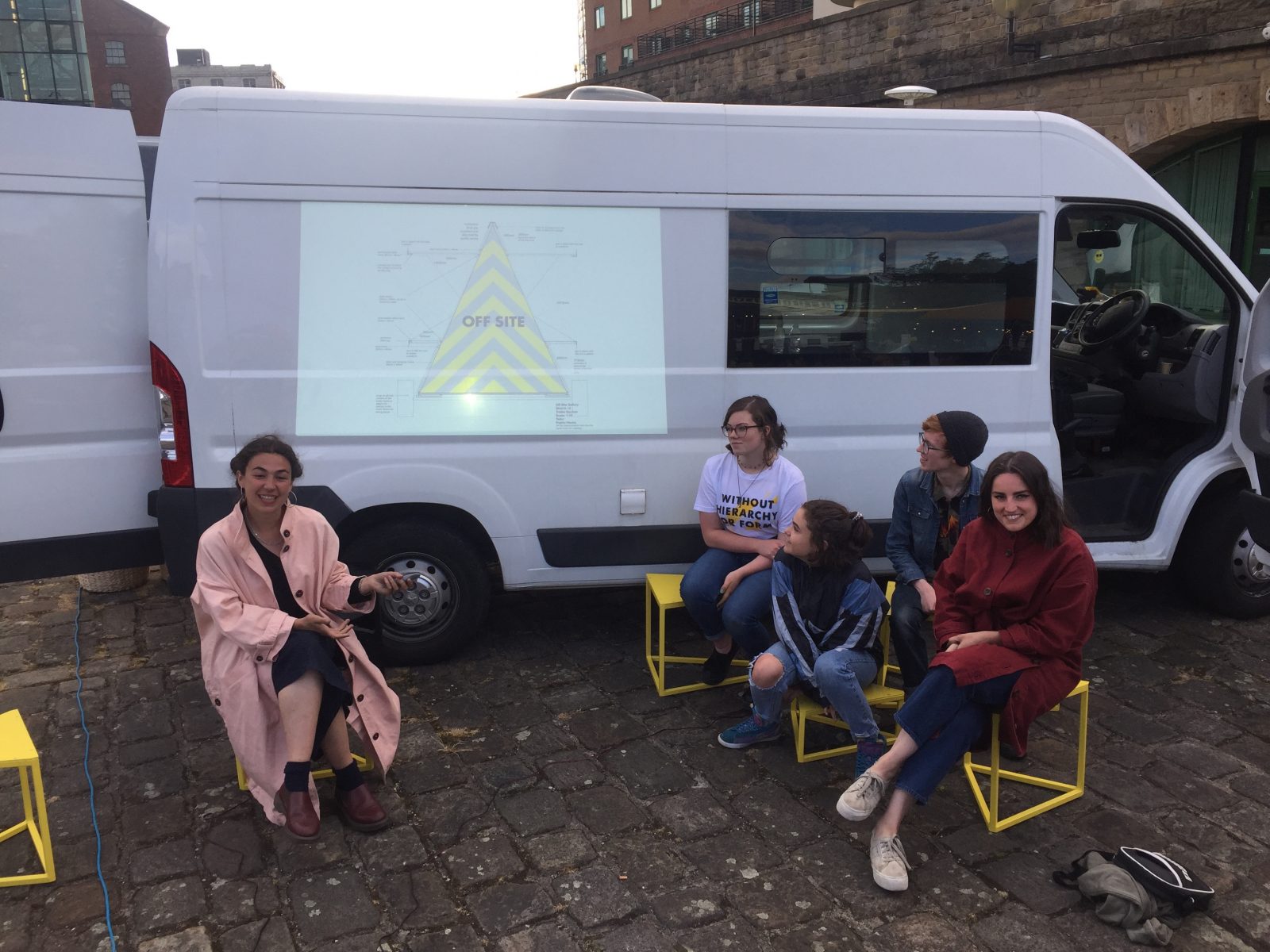 Site Gallery Digital Curator, Leila Johnston invited Historian Dr Ralph Harrington to join the Society of Explorers, guests and participants for the third of our Site Sessions events on Sunday 2 July 2017. It was a bit of a different one to usual as it was both 1) outside and 2) a co-curation with the Site Gallery team as part of the Floating Cinema weekend. Here, she summarises the day’s activities.

We had an afternoon of activities facilitated by our Society of Explorers, followed by the Site Sessions talks at 7pm. The crowd sat under a canopy, on pyramid seats and watched talks with slides projected onto the side of the van. But we’re getting ahead of ourselves. You’re going to need a bit of background.

We were given the opportunity to share Sheffield’s lovely Victoria Quays with Up Projects‘s amazing Floating Cinema – exactly as it sounds: a specially-constructed barge with a little film screening area inside it. We decided this would be the perfect opportunity to soft-launch our own brand new On The Road art van, created in a matter of months by architects Public Works in collaboration with our young people’s art collective, the Society of Explorers. It has been an enormous undertaking for all involved, and Sunday was the first time many of us had even seen it since before it went in for redesign, so it was a very exciting and somewhat nerve-wracking weekend for everyone.

With the van and the cinema boat we felt an ‘art on the move’ theme was starting to shape up, so we invited Chris Jarratt, Sheffield-based artist behind the Manor Makers collaborative boat and go-kart building projects. Chris brought a beautiful canoe he’d created with a group of teenagers, which was exhibited at Site Gallery in December 2016. He offered it for rides on the canal, as well as speaking about the project.

David McLeavy and Ben Judd of Bloc came too, to tell us about about building a geodesic dome on an urban island. Public Works and some of the Society of Explorers gave a great talk explaining their process and design decisions, and showing some lovely artwork of the ideas as they unfolded. To begin the Site Sessions event, transport/culture historian Dr Ralph Harrington kicked off with some fascinating insights into art and transport’s relationship over time.

The discussion that followed was really interesting. I had a few thoughts then which I may (you decide) be able to articulate a bit better now.

1.    All the projects involved the human scale as an important element. Maybe this is a really facile point, but it did seem to come up repeatedly. In the dome project, the height of the person building was a factor in constructing the top pieces. The boat project wasn’t formally weight-tested – nevertheless it was tested irrevocably, by the first person to get in; the architects modelled out their trailer by getting the tallest young person to lie in a pattern of tape on the floor. Digital is all very well, but the body can’t be argued with. I don’t know what people-centred design means, really, but body-centred design sure is fun. It also got me thinking about the rare, personal and finite nature of designing in-step with a human body. It’s not going to last a thousand years or be the size of a Cathedral, and somehow, right now, that feels a bit rebellious.

2.    Similarly, the idea of failure came up a few times. What counts as failure, and how physical mark-making is a commitment too far for many of us, nowadays. When I asked if these projects shared a ‘survivalist’ sort of vibe what with all the whittling and camping and rowing down rivers, Chris said that the Manor Makers teenagers were saboteurs. They initially tried to protect themselves from meaningful failure by messing up as deliberately and as quickly as possible. That suggests that survival cuts right through – yeah, it’s prepping and camping in an unpredictable political and economic world, but it’s also protecting yourself from perceived loss of status. Chris pointed out that digital lets you make as many mistakes as you like; young people (and any of us distanced from materials) aren’t used to this exposure of weakness. But while the physical world demands more from us and repeatedly humbles us, it often offers greater rewards. Nowhere to hide.

3.    You might call this stuff a kind of industrial handicraft. We are human-sized inside and out, and no individual human is very big until it’s plugged into multiple others. We really aren’t much use at all on our own. Not only that, but we’re often better when we’re with those from beyond our usual circle. The question of democracy came up: are these projects political? Is that what these ideas share? Certainly, they demonstrate a sort of ‘people power’ that feels acutely relevant in our tumultuous times. And they share a willingness to get out of one’s own immediate group (again, in contrast to digital), and to work with people totally different to yourself, whom you might never ordinarily encounter. This is true of the dome, where the public started pitching in in unpredictable ways, it’s true of Chris Jarratt and the teenagers from the Manor estate, and it’s true of Public Works and the SoE. It’s one of the key things that makes these projects so special.

4.    It was great – very local, very urban, very Sheffield and very ‘city of ideas’! The Manor Makers responded to the local canal; the dome used a nearby island, and the van marks out public space in the street playing on the vernacular of roadworks!

That’s it for now. Watch the #sitesessions hashtag on the social media, as ever, for news about the next one!