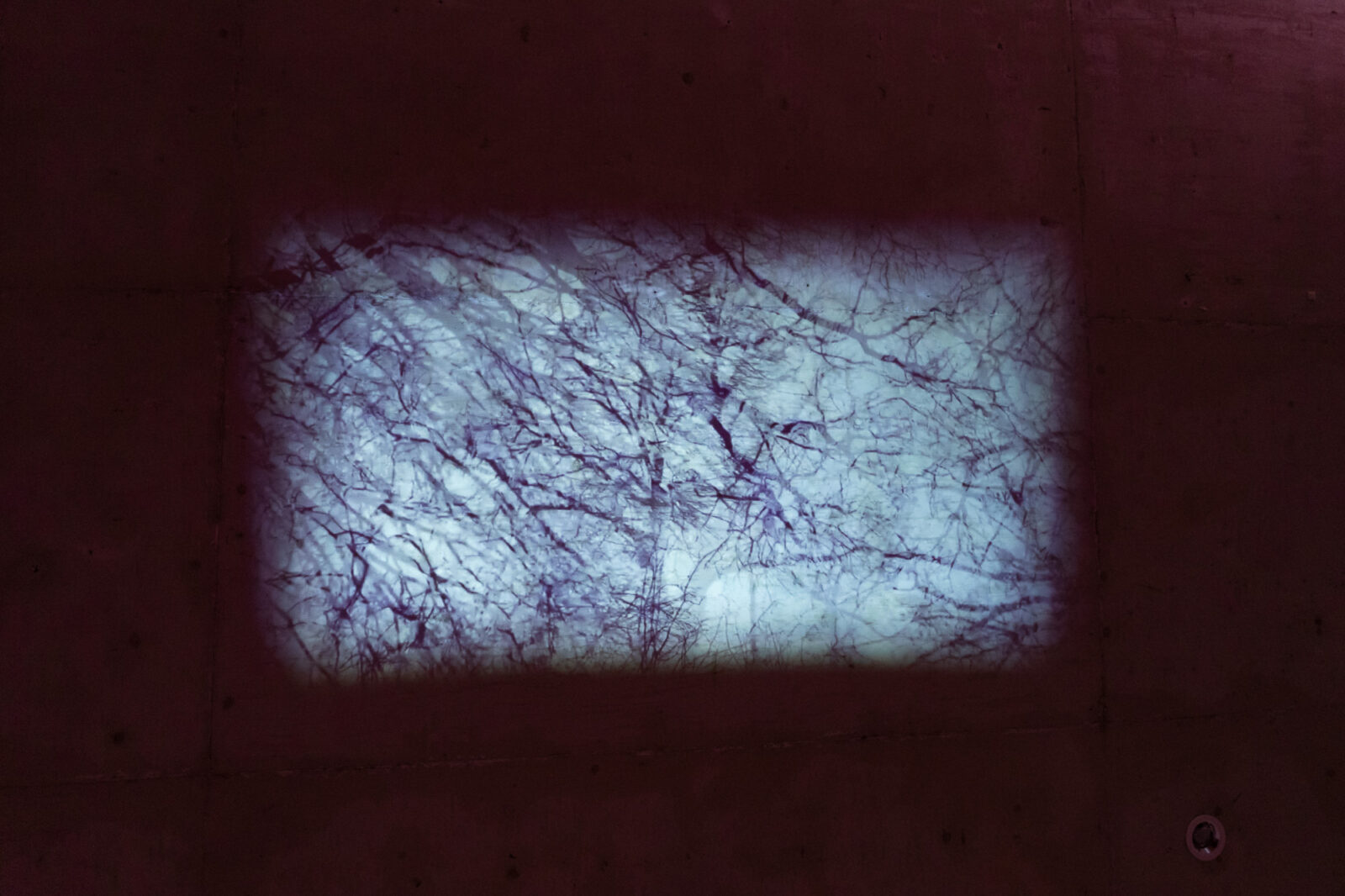 Water moves, changes and contorts; it is – and always has been – a fundamentally feminine entity, a divine force just like the earth, that situates, grounds, holds and evokes calm. Metonymically and temporally – the world is watery: it sustains us and comprises the bulk of our bodies. In Greek mythology, the goddess of the sea Amphitrite symbolises the ability to breathe underwater and harness the depths of the ocean. Similarly, the nineteenth-century writer Kate Chopin used water within her stories to represent her character’s feelings and the rebirth of female agency when going against the societal norms and patriarchy. How do we listen, live alongside and among water; how can it be harnessed as a form of feminism? 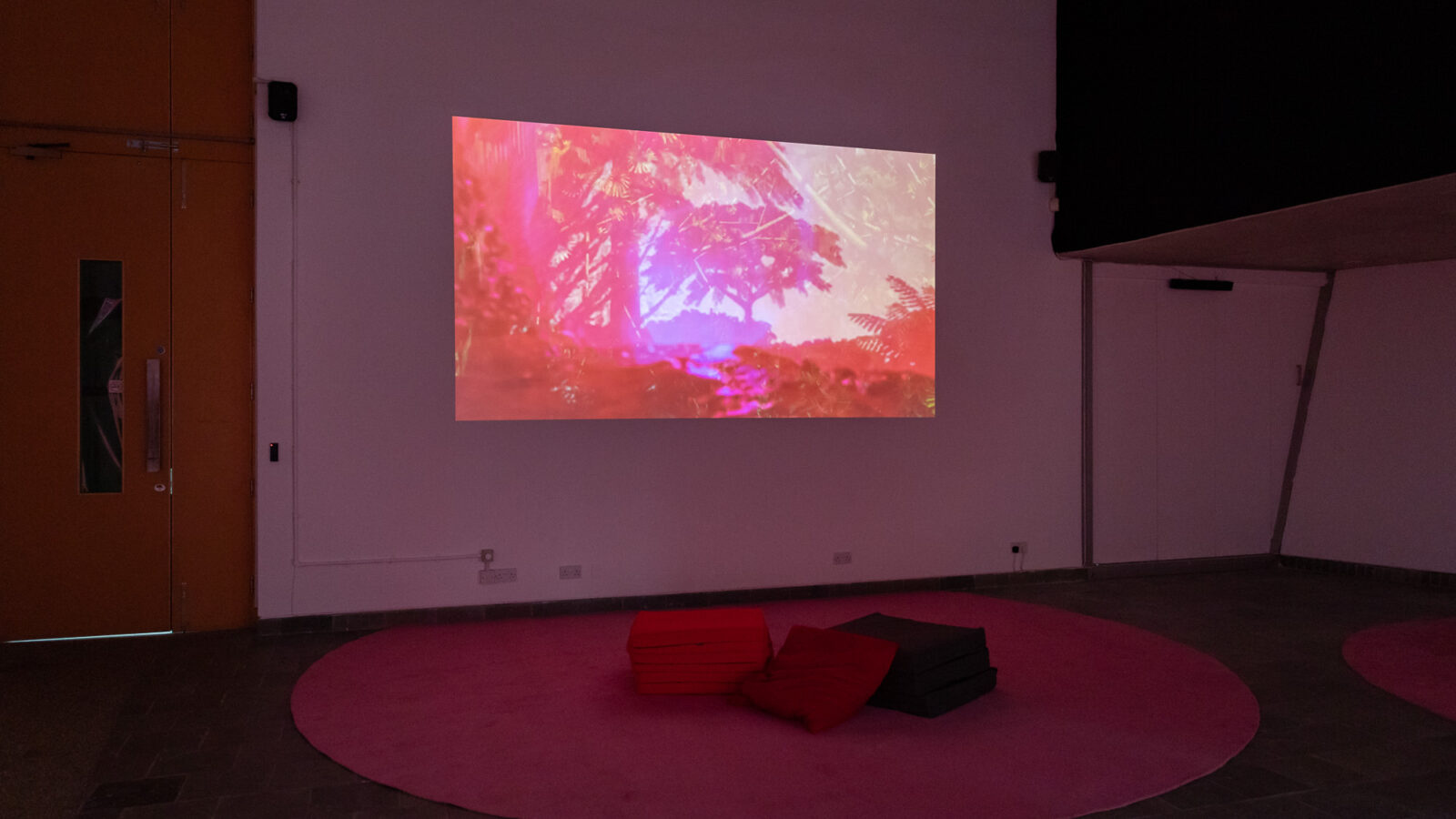 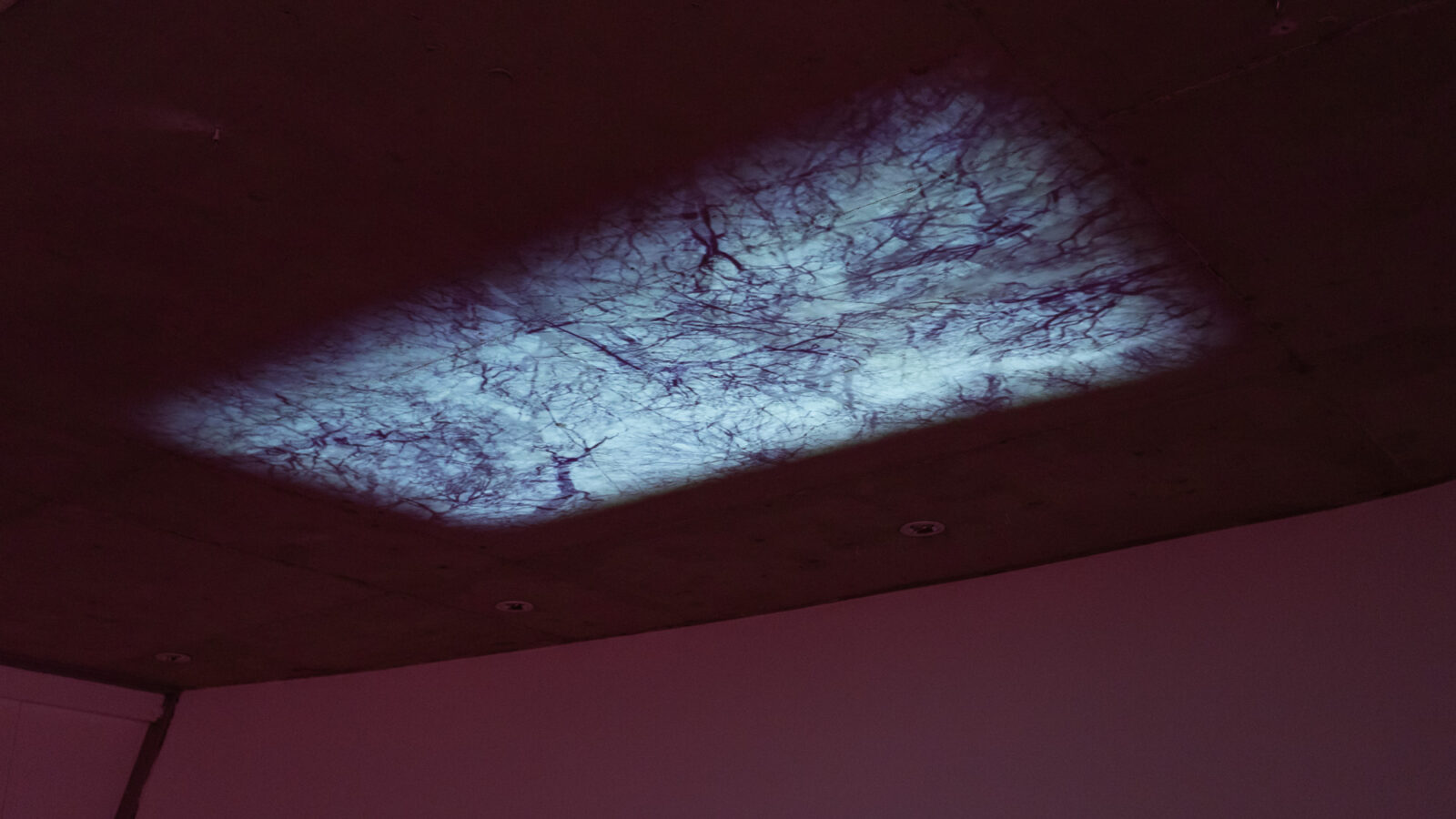 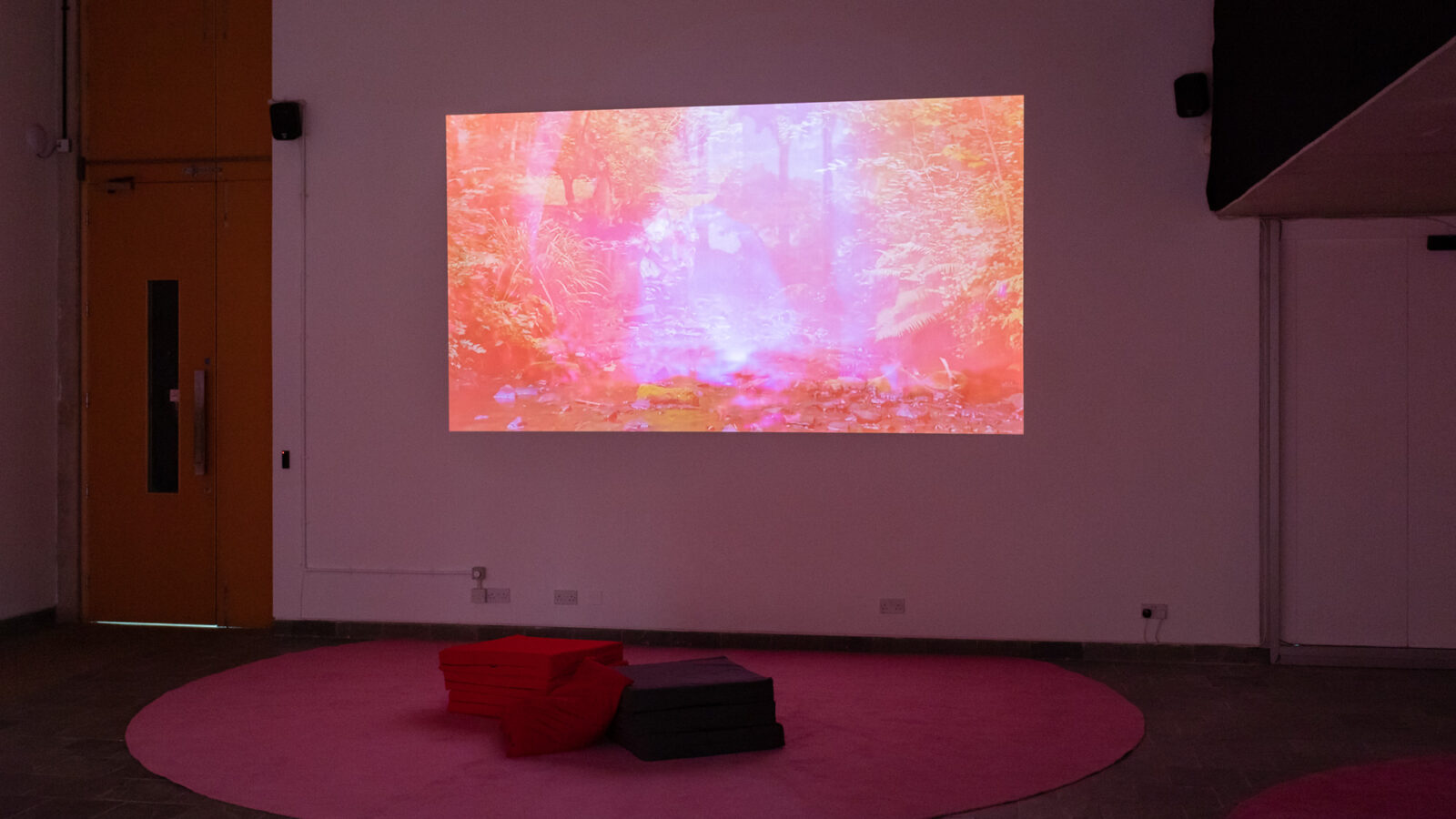 Reclaiming water underpins Lea Torp Nielsen’s installation at Persistence Works Gallery, Yorkshire Artspace, Sheffield. BROOK / HYDRA is texturally rich and ephemerally complex: Torp Nielsen’s multimedia series of works reorientate the viewer’s understanding of how we respect, view and interact with femininity, the kind and tactile. The reference to ‘Brook’ and ‘Hydra’ is used as a container to explore embodied female histories – Hydra, is used to convey ‘elemental tongues’ of encountering the land primarily through the body and movement.

All primarily site-specific, the works in the gallery space – which is predominantly concrete and grey – are separated by pink circular carpet cutouts which syphon off different areas of the space, of which soft beanbags sit on top. Created from field recordings, both visually and sonically, there are two videos in the space, and both are six minutes long – the first looms large on the back gallery wall, and the other to the right on the ceiling. Both are of a similar aesthetic disposition: wild videos of trees taken by Torp Nielsen are entwined with found footage, dark tones and eerie mimetic histories prevail through sound and image. It creates a cinema-esque sense, the cosy womb-like setting is constructed purposefully to be an inviting and calming space, where the viewer is invited to return to their body, as Torp Nielsen does herself. This tender restaging of the space – which, underneath is concrete and bare – becomes a holding, an opportunity to feel comfortable in re-grounding and sensory experience. In the ceiling piece to the right, which can only fully be seen by laying down beneath it, forcing the viewer to be both horizontal and re-grounding physically, dark trees captured at night move overhead.

The interweaving of the Loxley, Rivelin, Sheaf, and Porter Brook rivers in Sheffield create a somatic rhythm of nature, time, and energy, where bodies move between, through and around aqua formations in both videos. There is a profound sense our engagement with the rivers and water derives from Nielsen’s body and flows out into the world and the viewer. The nighttime tree branches elicit magic and the occult; historically witches are thought to be able to control the world around them, tapping into the unseen. Yet here the reference to the occult does not pertain to the societal ideals of the ‘evil’, despite – from a feminist standpoint – such suspicions revealing more about patriarchal anxieties concerning the female body and its powers than an unholy disposition.

This unwieldy somatic temporality also seems to tap into the inability to contain water itself – a visceral in-between state which, perhaps like the personal proximities to vulnerability, Torp Nielsen allows to come forth and does not need to be situated within a linear constitution of the self. In the ceiling video, Torp Nielsen’s daughter, Freya Faifua, recites fragments of Nielsen’s work, her voice assured yet tender. The video accompanying the text is of a darker disposition – an upward view of the trees from river walks which feel witchy and moody, where dark navy and spindly branches move and writhe in a strange dance accompanied by the softness of voice. The merging of Torp Nielsen’s voice with her daughter’s charters a cross-generational experience of feminism through the combining of their voices. Becoming hydra is shared and reorientates familial time as something from and beyond the cerebral; it is first and foremost profoundly personal, and an unusual foray into female voice and embodied movement with nature across generations.

At the front of the space a pink crystal rock sits on the gallery desk, a material expression of re-rooting of the artist’s body amongst the immateriality of film and sound. Empowering women through the footsteps and mapping of her encounters with the four rivers in Sheffield, Torp Nielsen asks us to bear witness to the everyday and the natural watery rhythms of the world. Ebbing, flowing, and sprawling, the artist moves beyond the person/nature binary and subtly demonstrates that we are bodies of water as humans. In this vein Nielsen posits water as a unifying entity, generating a collective of poetics, and politics, care, togetherness, and unified feminine experience.