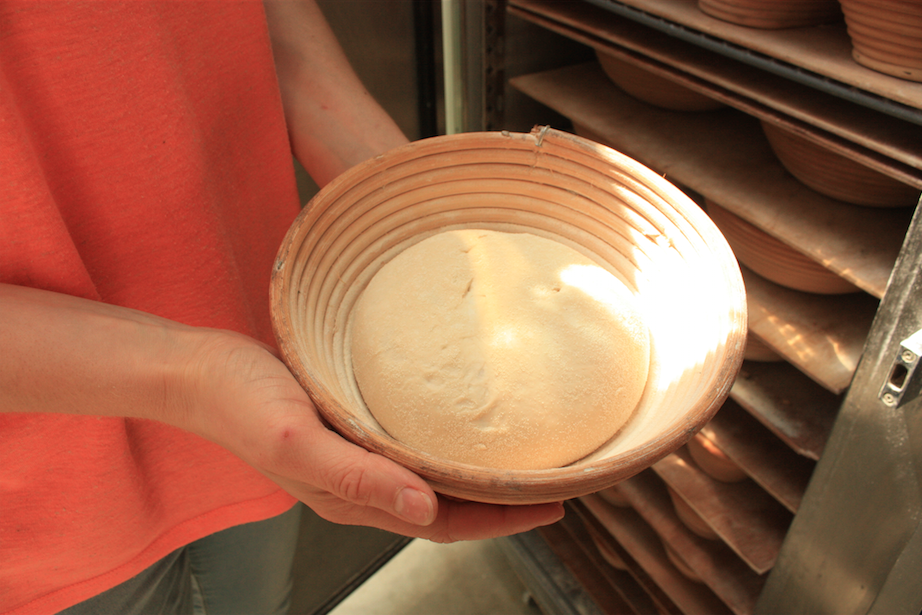 Fold and Stretch
Laura Wilson’s Platform residency brings dancers and bread bakers together to investigate the physicality of dough and its relationship to the body, movement and dance. Working alongside Martha Brown, Founder and Head Baker at Forge Bakehouse in Sheffield, and Leeds-based Choreographer Lucy Suggate, Laura will stage a series of rehearsals, while working towards the completion of a new video work and final performance on Saturday 9 April, 4pm.

Central to the project is the notion that dough is a live material, which is never static but continually morphing and growing. This builds on Laura’s ongoing interests in labour, skill and the manipulation of material as a way to transfer knowledge from one person to another. Her previous works have explored civic narratives and the passing on of traditions or particular trades from one generation to the next. At select points over the course of four weeks, Laura and Lucy will shadow the staff at Forge Bakehouse, incorporating their observed movements into a new choreographic work that will be devised in this gallery.

The radio is tuned to the same station as played in the kitchen of Forge Bakehouse, and three bespoke wood and milled steel tables echo the design of the main baking station there. The tables are industry standard, 90cm from the ground and modular. They can be used as separate workspaces, or combined to form one large stage-like platform. A video of Lucy Suggate’s solo performance Liquid Gold (6.53 minutes) is shown on a monitor, and bread recipes from Martha are also presented. In the adjacent gallery a new video by Laura is projected; The Bakers (5.48 minutes), combines footage from two family run businesses – a bakery and a brick factory – located just outside London. Both businesses have hand produced their products for over 100 years.

About Platform:
Platform is a nationally unique artistic development programme, which gives our galleries over to an artist, or group of artists, to make new work in public. Come explore how ideas are born, nurtured and developed into new work. The gallery is open as usual Tuesday – Saturday 11am – 5.30pm.

Martha Brown is the Founder and Head Baker at Forge Bakehouse, which opened November 2012 and moved to its premises and current location on Abbeydale Road in December 2014.

Martha is a native Sheffielder with a passion for baking. For her, bread baking combines science with creativity and is not too dissimilar to how bread has been traditionally made for thousands of years. She writes:
‘The environment of the bake house is full of sounds, smells, tastes and textures that engross you in the process. Dough is tactile. It’s fun to play around with and responsive to the hand’s movements and forces exerted on it. You are working with a living breathing mass of dough until it is baked. It’s so effected by the seasons, temperature and ingredients that you need a real understanding to work with those changes to ensure you are still making a consistent product.’

Lucy Suggate is a Dance Artist based in Yorkshire. Since 2006 her work has continued to gain visibility on national and international platforms. A finalist in the Place Prize 06 with postcard, Lucy went on to be in residence at the Daghdha Church, Limerick, Ireland in 2007-10. Here she worked with choreographer Michael Klien to produce a body of solo work that continues to be performed all around Europe.
In 2013/14 Lucy became a Modul Dance Artist for European Dance House Network and produced a durational solo with Sonia Gomez. This project went on to inform the solo Pilgrim, influenced by pioneering electronic musician James Holden. In 2014 Lucy performed live with Holden as part of Sónar Festival, Barcelona and Wysing Multiverse Festival 2015.
Further presenting Pilgrim as part of Seoul International Dance Festival, Korea. Nottdance Festival 2015, UK and Solo Tanz Festival 2015, Germany.

Recent collaborations include working with Rosemary Butcher on Secrets of the Open Sea, Test Pieces and Wendy Houston’s Stupid Women. Currently Lucy is working with Siobhan Davies Dance in partnership with The National Gallery as the UK artist, participating in the Dancing Museums project (2015-2017) bringing together five European dance organisations to explore new ways of interacting with audiences.
Here is a short video of Laura Wilson talking about her residency project. The video was filmed at Forge Bakehouse in December 2015.