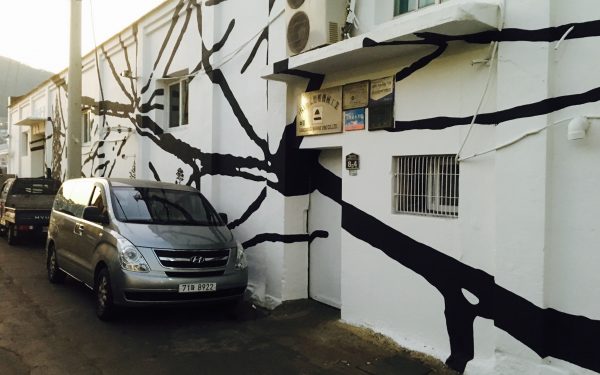 This October, we swap Sheffield for South Korea, as we launch new art works commissioned from two artists from Sheffield.

Site Gallery and Creative Plan B have collaborated to bring Sheffield-based artists Paul Morrison and Ben Tew to the vibrant shipping port of Busan to produce new site-specific work. Both artists are making new work designed for specific outdoor locations chosen during a research trip back in June this year.

Sited along a street-length factory wall in the Kangkangee Art Village, Paul Morrisonhas turned his painting practice to the public realm. His work Equisetum draws the natural world of the hills that overlook the city into the noisy, busy world of the dockyard. In his characteristic black and white palette, plants weave their tendrils over the whole building creating a fragmented pattern reminiscent of dazzle-ship camouflage.

Water, industry and the aesthetic of the broad walk can be seen in Ben Tew’s Strandswork which has been developed in collaboration with Sheffield’s design collective Universal Everything. Set high above the prows of the boats at the dock, at the top of two pylons, 360 animated LED lights ripple slowly across bespoke steel frames produced in Busan by local craftsmen based in the dockyards.

KangKangee Arts Village has been compared to parts of Sheffield, with its industrial past and present, and dynamic arts scene existing alongside it. Part of the Site Gallery led City of Ideas programme, the next stage of the project will see 3 South Korean artists (Hun-Joo Koo, Su-bin Heo, Hyeong-Seob Cho) return to Sheffield where they will install new works at outdoor locations in the city centre.

This project is funded by Arts Council Korea (ARKO) and Arts Council of England, and is part of the British Council’s Busan-Sheffield Inter-City Arts Project, KangKangee Arts Village Project in partnership with City of Ideas.