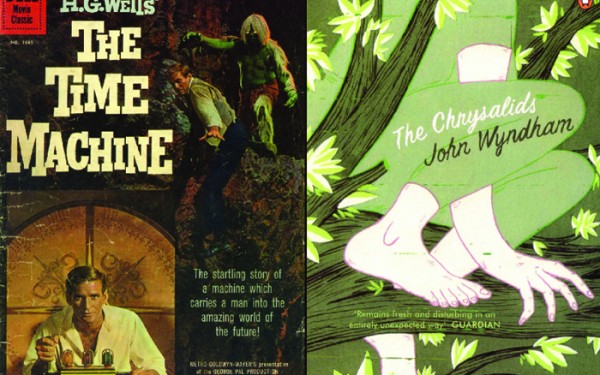 We continue our series of informal reading groups with a look at H.G. Wells’ The Time Machine and John Wyndham’s The Chrysalids. Matt Stokes has drawn from a variety of literary, cinematic and televisual influences to create a futuristic world inhabited by post-nuclear survivors in his new installation, In Absence of the Smoky God.

Copies of The Chrysalids and The Time Machine can be purchased from Site’s bookshop. Loan copies are also available at Sheffield libraries. Extracts from both books for advance reading will be sent to those who register.

Book your free place below.
Thursday 9 October, 5.30pm
H.G. Wells, The Time Machine
H.G. Wells’ protagonist is a Victorian scientist and inventor whose exploits in his time machine see him travel some 30 million years into the future.  Published in 1895, Wells coined the phrase ‘time machine’ and this is thought to be the first example of time travel by vehicle in popular fiction. On his journey, he encounters the Eloi and Morlock’s – two different species he believes to have evolved from humans – one living above ground and the other dwelling below. His relationship with them eventually reveals what fate has befallen Earth and mankind.
Matt has been inspired by a variety of sci-fi influences to create the post-apocalyptic world we see in his new installation. This first reading group on Wells’ The Time Machine, will delve deeper into the themes raised in Matt’s work and other sci-fi classics.
Thursday 30 October, 5.30pm
John Wyndham, The Chrysalids
John Wyndham’s  1955 post-nuclear apocalypse tale depicts a devastated world striving to establish uniformity and eradicate abnormalities. “Keep pure the stock of the Lord; watch thou for the mutant”. Genetic mutations and newfound telepathic capabilities are kept secret and yet for some these ‘offenses’ offer greater freedoms.
In Absence of the Smoky God leads us through imagined underworld and overworld populations that survive nuclear attack. We will discuss the comparable threads running through Wyndham’s The Chrysalids and Matt’s new work, most significantly the idea of dramatically re-born dystopian and utopian societies.