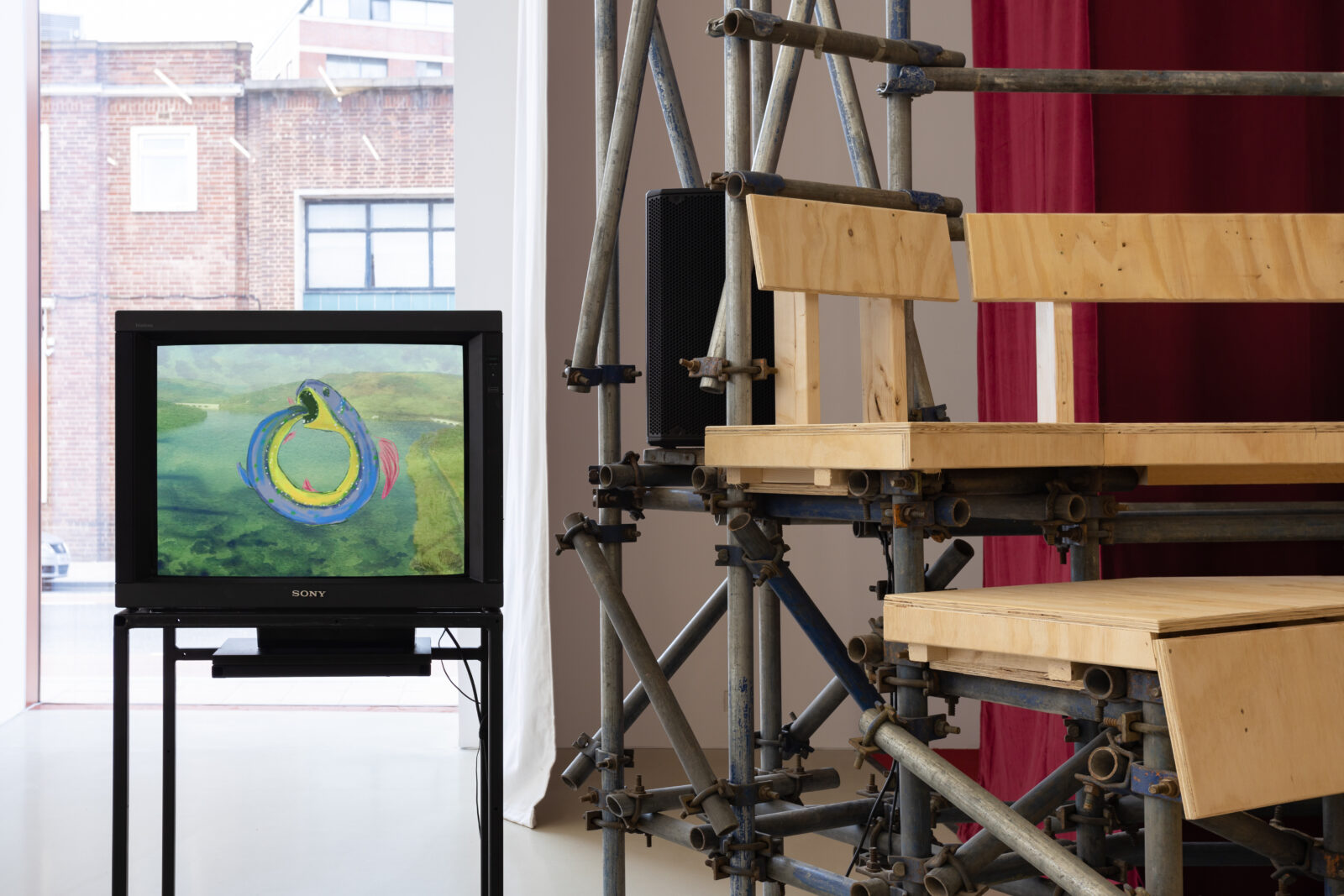 Join us for an in-conversation with artist Laura Wilson and Site's Angelica Sule and Robyn Haddon, followed by a live performance of Gutted.

The evening will begin with an in-conversation with the co-curators of IN-SIDE-OUT-SIDE-IN, artist Laura Wilson and Site Gallery’s Angelica Sule and Robyn Haddon. Following this, we will be joined by actor and writer Cush Jumbo OBE to perform a live reading of Gutted, a script written by Laura Wilson with screenwriter Alan Whiting.

Performed within Wilson’s sculpture Ladybower, Gutted investigates gut processes, instincts and ecosystems; from digestion inside our bodies to landscape-scale infrastructure and archaeological digs. Alongside bringing to life digestive processes and encouraging us to consider how we think and feel through our stomachs, the work takes the idea of the hole as both an entry and exit point, a barrier between the inside and outside, it can be a portal between worlds – it consumes, and it vomits.

Laura Wilson’s new work Gutted was commissioned by Site Gallery and comprises an audio recording of the script voiced by Jumbo, a video, animation and sculptural installation. It is presented within the exhibition IN-SIDE-OUT-SIDE-IN until 22 December 2022.

Cush is well known for starring in US series The Good Fight and can be seen as the lead in Britbox’s The Beast Must Die opposite Jared Harris. Cush is the author of Josephine and I and has received an OBE for her contribution to Drama. This year, she received an Olivier nomination for Hamlet at The Young Vic Theatre, and starred in Netflix thriller Stay Close. Cush has just wrapped on New Regency’s Balestra and is currently filming Apple TV series Criminal Record in which she stars and Executive produces.

Alan Whiting was the lead writer on the international hit drama Wire In The Blood for ITV (Coastal Productions/Southern Star), for which he was nominated for an Edgar in America. He adapted the critically acclaimed Half Broken Things for ITV (Festival Films) from the novel by Morag Joss, which was nominated for a Broadcast Award as Best Drama, which starred Penelope Wilton. He co-created and wrote Kingdom for ITV (Parallel Film and Television), starring Stephen Fry; and created and wrote the award winning The Trials Of Jimmy Rose starring Ray Winstone and Amanda Redman for ITV. He previously wrote The Scarlet Pimpernel for the BBC, starring Richard E Grant, which won him a Royal Television Society Award. He has also written Strike Back for Sky (Left Bank) amongst many other shows. He wrote five hours of Titanic: Blood and Steel (De Angelis) alongside Matthew Faulk and Mark Skeet, which aired on Encore in the US. He has adapted the novel Ratlines into a TV series for Ripple World, RTE and Northern Ireland Screen, currently in pre-production. He has also created and written Oil with Mark Skeet and Matthew Faulk, a drama set in the oil industry of the Persian Gulf of the 1970’s, currently in development with Nevision; as well as written and created Protection with Zafrir Kochanovsky and Yizhar Har Lev, for Red Arrow International, TTV Productions (Israel) and 87 Films (UK), which is currently out in the marketplace. His latest book adaptation is in development with Three Tables Productions.

Laura Wilson is a Northern Irish artist based in London. She is interested in how history is carried and evolved through everyday materials, trades and craftsmanship, working with specialists to develop sculptural and performative works that amplify the relationship between materiality, memory and tacit knowledge. Wilson’s interdisciplinary and research-based works have been exhibited widely including at: The Collection, Lincoln with Mansions of the Future, UK; First Draft, Sydney, Australia; The Landmark Trust, Wales, UK (2021); 5th Istanbul Design Biennial – Empathy Revisited: Designs for More than One; Norwich Castle Museum & Art Gallery, Norwich, UK (2020); The British Museum, London, UK with Block Universe; Kettle’s Yard, Cambridge, UK; and The Petrie Museum of Egyptian Archaeology, London, UK (2018); SPACE, London, UK; V&A Museum, London, UK; and Invisible Dust at Hull and East Riding Museum, Hull, UK (2017); Delfina Foundation, London, UK (2016 & 17). She was awarded the Dover Prize in 2021 and has a forthcoming solo exhibition at CCA Derry~Londonderry, Northern Ireland in 2023.