Art, Science and The Truth 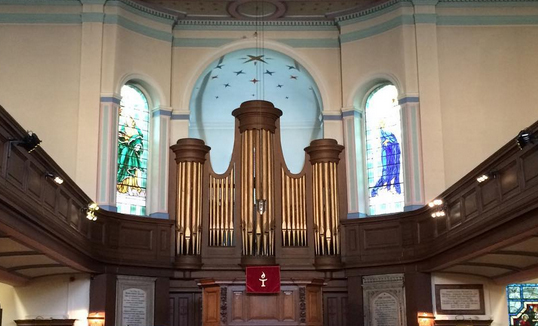 Simon Ings, author and culture editor at New Scientist, Katharine Vega, artist and educator from Brighton and Dr Sean Power, philosopher from Trinity College, Dublin, joined the panel for the first in our new series of events – Site Sessions. The event took place on Thursday 27 April 2017 at the Upper Chapel – a lovely church venue in the centre of Sheffield. The theme was Art, Science and The Truth.

The evening started with short talks from each speaker, introducing their work and their approach to the subject matter. Initially it looked like they had very different takes on the idea of truth in relation to art and science, but we discovered some interesting overlaps over the course of the evening.

It was a sophisticated and passionate discussion, all the talks came completely from the heart and everyone was open to disagreement from others, which felt particularly important. It was also very much not a sceptic or pro-science method event, which was deliberate; there are plenty of events for sceptics.

Audio to follow, but in the meantime, here are some snippets from the night to give you a feel for it:

Sean talked about the different kinds of truth, such as science and trust. He says that science likes a ‘justified true belief’, whereas other kinds of belief are more like trust. Trust is interesting because it’s something you do when you don’t have evidence. Sean is interested in an ethical question here: if you know something, do you have an ethical duty to share it?

Katharine followed Sean, to talk about somatic experience and she then showed some examples of her work, including a VR experience that develops the body into beautiful natural forms. She led a wonderful guided meditation where we focussed on sensation in our bodies while listening to her voice – bringing us all back into focus.

Simon Ings discussed the idea that fiction is about building a symphonic structure. He believes that imagination is about moving someone, not about ‘weird ideas’, and that fiction brings a truth that makes you feel.

After the three presentations, the audience were invited to ask the panel questions, and to have an open discussion about the themes. Interestingly, a distinct current running through this conversation related to power and money – who has the money, wants to hold onto the money, controls the consensus truths?

The next Site Session at ROCO will take place on Thursday 25 May.

A City of Ideas project.