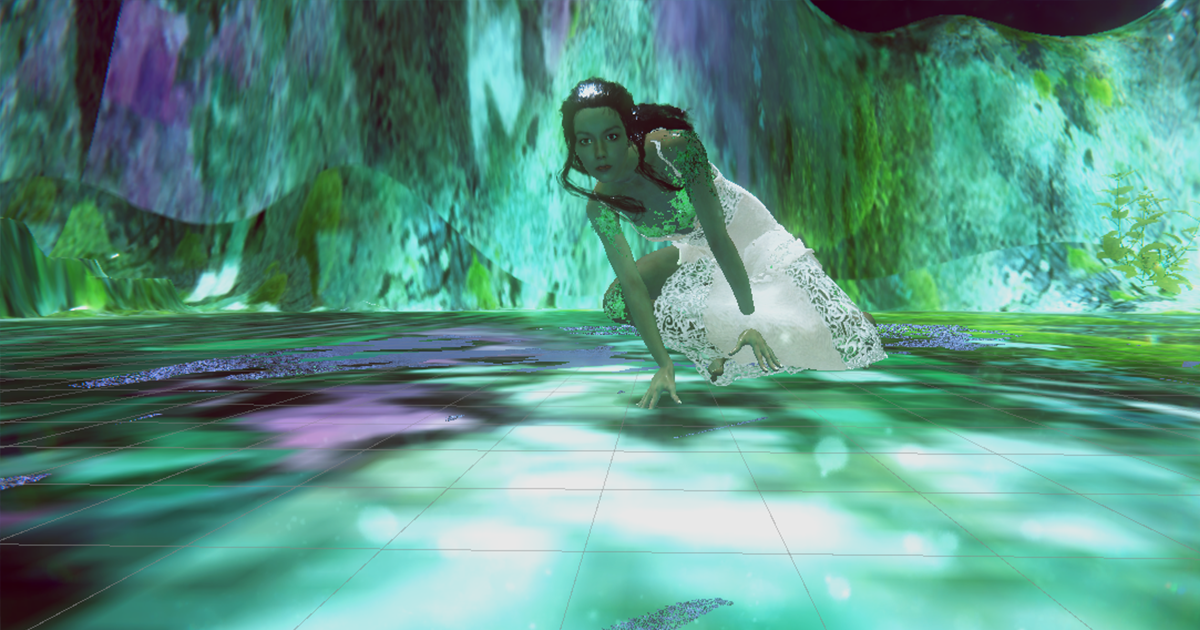 Phantom envisions a corrupted sub-section within a videogame, which self-manifests creating a glitching digital realm, formed outside of human design and intention.

Created using Indie game design software, the work reflects upon and responds to the patriarchal tendencies of the gaming industry. The performers subvert stereotypical female videogame characters, seeking to deny these superficial tropes.

Each performance disrupts caricatured videogame character movement, contrasting these highly stylising and specific actions with raw and visceral movement patterns. These embodied actions imagine a virtual body learning to move for the first time, whilst being violently interrupted by the dominant existing physical vocabulary of gaming movements. It also explores the differences between physical and virtual bodies, juxtaposing a physical body at rest, limp and heavy, with the virtual body at rest, strung ridged in ‘T’ pose. The combined tension between these states breaks down the performers’ bodies, creating grotesque digital forms that bend, twist and compress in ways that the physical body cannot.

Performed and choreographed by the artist, the movement sequences were recorded using motion capture, allowing for a paradoxically embodied yet disconnected process of creation. The physical body existed in a loop, emulating digital and videogame-like movements, attempting to physically glitch, freeze and stutter whilst also seeking to provoke error in the motion capture tracking system.

The physical body would contort and twist, deliberately obscuring limbs and moving sensors, trying to control the ultimately unpredictable process of creating glitches. These errors could not be perceived by the artist during the recording and could not be replicated after the fact.

Similarly, the physical performance space was disconnected from the virtual space, requiring mental projection to imagine possible interactions between avatar and environment.

Once transplanted into the virtual realm, the avatars are awakened by the motion capture data and become futile, monstrous yet beautiful entities upon which the viewer can peer and observe. Unlike classic non-playable-characters they do not respond or even acknowledge the viewer. They do not exist for them or their entertainment and continue to cycle defiantly through their own internal conflict.

With special thanks to our feedback workshop participants:

Sian Fan is an interdisciplinary artist working in London, where she is artist in residence at the Sarabande Foundation. She is a graduate of the Fine Art Masters course at Central Saint Martins, where she was awarded the prestigious Mona Hatoum Scholarship and was nominated for the Nova Award. In 2014 she graduated from the University of Brighton’s BA Performance and Visual Art Dance course, where she was awarded the prize for Outstanding Creative Achievement.​

She has exhibited internationally with venues including Tate Modern, British Council, and the ICA, as well as producing work with Channel 4, the BBC and Google.

Her work combines movement, the female body and technology to explore embodiment, spirituality and human experience in the digital age. Drawing on her background in contemporary and aerial dance she suspends, fragments and augments the body via choreography and digital techniques. She works across mediums, combining the physical and the virtual through sculpture, performance, animation, moving image and virtual & augmented reality, and seeks to create works that heighten our awareness of the experience of being online.

She is fascinated by virtual identities, and in how we construct virtual bodies which exist in hyperspace beyond our physical bodies. Overall, she is concerned with the complexities of spiritual experience and with being human in our increasingly digitised and hyperconnected world. Through her work she hopes to discover new ways for us to coexist with technology.

Sian Fan is joined by artist Victoria Lucas for an artist talk and in-conversation around Fan’s new commission, Phantom.